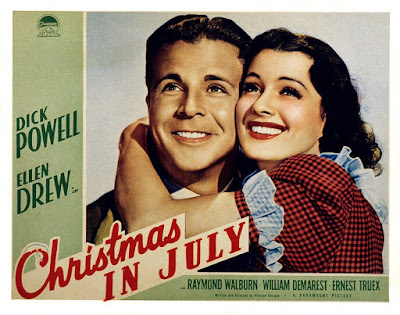 Where Preston Sturges gives us joy through the Great Depression.

Right around the time the United States was finally coming out of The Great Depression, Preston Sturges released his second film as writer/director: Christmas in July (1940). Despite the title, the movie actually isn't about Christmas at all. It's about the Depression, the wealth gap in the country, and how difficult it is to succeed. It's also a really, really funny movie.

Christmas in July is a 67 minute comedy about a young couple, Jimmy (Dick Powell) and Betty (Ellen Drew), who are very much in love but also very much in the poor house. They're not unusual in this way, the movie makes it a point that we know how common their situation is. They live on a street of close friends and relatives who are all in the same difficult financial situation, and they work in a crowded and dehumanizing office full of fellow worker bees. Despite Betty's optimistic view that their love can conquer anything, Jimmy is set on thinking more practically and avoiding marriage until he can become a financial success. He obsesses over contests with big prizes, and is waiting to find out if he won the $25,000 award for a coffee company's slogan contest. When some of his coworkers play a practical joke on him by sending him an award telegram, Jimmy finds out how many of your dreams can come true if you just truly believe it.

This movie might just be my favorite discovery of the year so far. Preston Sturges expertly fits a thought provoking story about the difficulty of life in the Depression into a wild and hilarious comedy. That's a skill I admire so much. I'm not a screenwriter, but I have to imagine it's easier to write a serious and realistic script about the sadness of poverty than it is to make a truly entertaining and funny movie that makes the same points. I recently wrote about Sturges' Sullivan's Travels, which he made the following year, where he makes the point that the ability to make people laugh can be even more important than making movies about social issues. And yet here he is, making a pretty political movie about class wrapped up in a comedy. The man is a genius, yet always comes across like he's only trying to make funny movies to give people some laughs. He's quickly becoming one of my favorite directors. 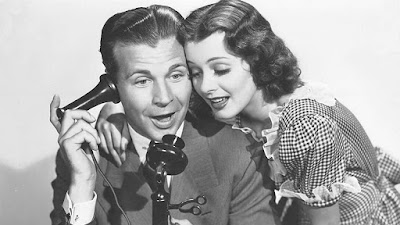 I've seen Dick Powell in a few movies before, but I've never loved him as much as I do here. His performance as Jimmy is incredibly endearing in how much we want him to succeed. We know he's not the most talented or intelligent guy, in fact, he's incredibly average. His slogan goes, "If you can't sleep, it's not the coffee it's the bunk". First, it doesn't sound good, and second, it doesn't make sense. Jimmy is convinced that there's a scientist somewhere who has proven that coffee helps you sleep, not keeps you awake. Betty knows that's nonsense, but she loves him for how much confidence he has in everything he believes in. She knows he can be a success because he's passionate and excited about everything he cares about. And yet, no one will give him a chance. He's just another worker pushing through the depression trying to make ends meet with a few bucks a week. He's a stand in for every average person in the working class who deserves a chance and can't get one. Powell absolutely crushes it, and Ellen Drew as Betty encouraging him and pushing him forward only makes us love him more.

The income inequality of the film feels very current to 2021. Our lovable lead couple can't afford to get married, while the old boss of the coffee company throws around $25,000 because one of his employees told him a contest was a fun idea. The money would change everything about Jimmy and Betty's lives, but it means so little to the major corporation. Jimmy's middle manager boss gives him a speech that he shouldn't measure success in riches that will never come, because a system where 1% succeeds and everyone else fails cannot work. So he should just consider himself a success now. This sounds like good advice, but it doesn't change the fact that he can't afford a ring for Betty or a new bed for his mother. A better mindset doesn't change the fact that they are living in a world where a small group succeeds and everyone else fails. This may be about the Great Depression, but it also conjures up memories of recent news that Billionaires experienced incredible income growth in 2020 while the greater population faced unemployment and evictions like the United States hasn't seen in decades. Movies from this period are starting to feel less dated than ever. 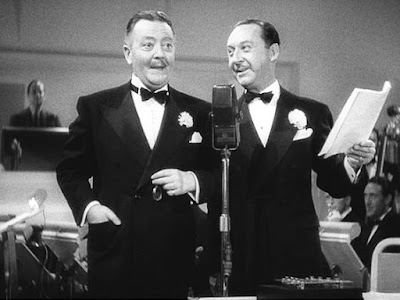 But I have to reiterate again how incredibly funny and high energy this movie is. It's populated with incredible characters actors like Raymond Walburn as the frustrated head of the coffee company begging his employees to pick a contest winner, and Preston Sturges favorite William Demarest as the stubborn grouch keeping the voting jury at a deadlock.  Everyone in this movie shines so brightly, and the short runtime let's everyone run in, blow up the screen, and get out just as fast. Watching the company scramble to figure out what is going on through their giant mess of bureaucracy is hilarious. A good-natured guy accidentally cons them against his own knowledge, and their confusion makes it as easy as possible for him. This is a fast paced and incredibly warm-hearted screwball comedy about lovable people finding some joy in their lives. I adore everything about it.