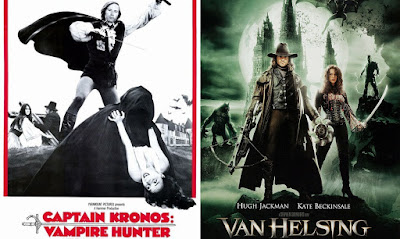 Welcome to Episode 1 of our new series on The Dark Universe! For the next 6 episodes we will be taking a look at 6 different classic monster reboots from the 2000’s. Each episode will open with a discussion on an older horror film that pairs well with the reboot we’ve spotlighted, and today we’ll be talking about two action hero vampire hunters. Hammer’s Captain Kronos: Vampire Hunter (1974), and the Stephen Sommers blockbuster Van Helsing (2004). Joining Daniel is action movie expert Michael Scott, the host of Adkins Undisputed: The Most Complete Scott Adkins Podcast in the World. Together they discuss these superhero monster hunters, offer more than a few controversial opinions, and use crossbows to vanquish all evil.
Action/Horror movies also discussed: Brotherhood of the Wolf (2001), Dog Soldiers (2002), Overlord (2018), The Legend of the Seven Golden Vampires (1974), and the Underworld franchise.


Email the show at cobwebspodcast@gmail.com to let us know what you think of the movies, give feedback and/or request an episode!
Adkins Undisputed: The Most Complete Scott Adkins Podcast in the World