Think your kid might be the devil? Then come on in!

Remember that ridiculous twitter trend of people putting out "confessions" that would get their "horror card" revoked? I find the whole idea of a "horror card" pretty offputting so I didn't participate, and it also just seemed to be an excuse to trash on classic films like The Shining and most anything old. However, I will participate with a confession right now, just for you folks. Before last night, I'd never seen an Omen movie.
To right this agregious wrong, I picked up the Scream Factory boxset for the entire Omen franchise (look below to see how beautiful it is!!), and intend to go through the whole thing by Halloween 2020. Look to this on-going "He Rises" column for my reaction to each film! Ready to make a deal with the devil?? Okay yeah no, let's just talk about a movie instead. 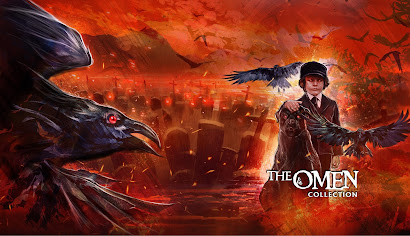 The Omen follows the story of a respected American Ambassador named Robert Thorn who reacts to the tragedy of his deceased infant son by adopting another child and resisting to tell his wife about the switch. As the child, Damien, grows older stranger and darker things start to happen until the parents start to suspect he may be an unholy offspring of the devil!
I knew The Omen was a highly respected horror film (what I considered the most important classic of the genre I hadn't seen), so of course I expected the movie is be good. But what ended up surprising me about the film is just how hard it goes in the horror department. Turns out, this isn't the tame, classy, "it's what you don't see that's scary blah blah" respectable horror film I was expecting. You know what kind of movie I'm talking about. Movies like The Others (2001) or The Changeling (1980). I'm not insulting these movies, especially not The Changling which I love. But they are dramas that tend to play down the trashier elements of horror in order to come across more respectable. A lot of ghosts films these days take this approach to be more family friendly. It's not always a bad choice, I just tend to like my horror a little crazier or even "cheesier". Watching The Omen reminded me of when I first saw Bram Stoker's Dracula (1992) when I was expecting Oscar bait but instead got the wildest version of Dracula I'd ever seen. The Omen is a religous horror film that ends up being something of an early slasher movie, in that it becomes about over-the-top kill scenes. And oh boy the kill scenes are fun. 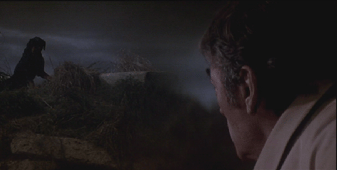 The movie makes up for the fact that it's villian is a pretty unimposing little kid by making the real horror of the piece the powerful unseen force of Satan. In an almost Final Destination way, character are brutally and creatively killed off through the devil manipulating chance to make crazy and completely ridiculous tragedies occur. I mean all of this in a good way, it's a blast.
The Omen also benefits from the all-encompassing feeling of evil that surrounds the film. It reminded me of The Exorcist III in the way it creates a Satanic atmosphere through music and images that makes everything in the movie feel that much creepier. I think I'm discovering recently that I'm a total mark for Satanic horror movies. I grew up in a religious household, but never felt afriad of the devil and currently don't even believe in such a being. So I'm not sure why these movies work so well for me, but I find the feeling of there being an all-powerful evil presense throughout a movie to really work for me. And I'm not sure how much this had to do with the fact that I watched it alone in the dark very late at night, but I found the movie pretty damn scary. Even though my gut reaction was to roll my eyes at the fourth wall break of the final shot, I can't deny I found it absolutely chilling. My subconscious would have none of my ironic distance, the movie works no matter what. 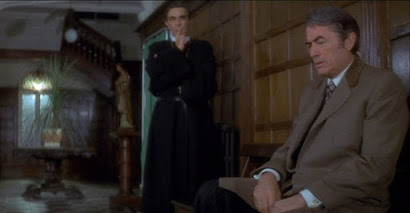 It almost seems pointless to discuss how great the cast is. This is a rare horror flick that is so prestious it casts a Hollywood legend like Gregory Peck in the lead role. I'm a big fan of Peck's work throughout his classic Hollywood output and really enjoy his particular brand of stoicism. I won't say he reaches quite the heights of George C. Scott in the previously mentioned The Changeling and The Exorcist III, but he is sympatheic in the role. That's key for this character considering some of the irredeemable choices he makes. It's almost impossible to believe his inciting choice to switch his dead son for Damien without talking to his wife, but I have to remember the generation and class he comes from. He probably considers it his duty to protect his wife from unpleasant truths and bare that burden alone. It's a masculine mentality I hope is going away as marriages become more about equal partners. On that same topic, it is pretty crazy how underused Lee Remick is as Katherine Thorn, the boy's mother. To completely sideline the mother in a story like seems like a mistake. I can accept that this is a movie about fatherhood moreso than motherhood, but I don't think it has anything to say that is exclusive to that side of parenthood. I'm not expecting the remake to be as good as this film, but that is something I'm hoping it can improve upon. More on that later!
I knew The Omen would be good, but I can still say it was a pleasant surprise. Scary, but that's pleasant for a weirdo like me.
Stay tuned for Damien: The Omen II!
Posted by Daniel Epler at 9:27 AM