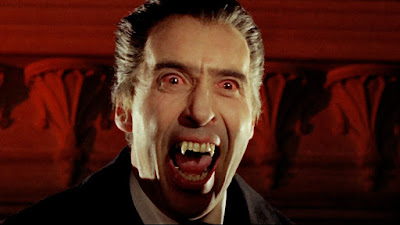 All Hail the Prince of Hammer!

Let me get this out of the way right here; I love the Hammer Dracula series. One thing I love about it, and find so interesting, is that it is a Gothic Horror series that resembles a Slasher franchise in so many ways. Each films follows a new group of young, attractive people, Dracula is brought back to life somehow, he wrecks havoc on their lives, and then Dracula is somehow defeated. Much like Slashers, these films are extremely formulaic. And like with that subgenre, I find these films comforting. Some are truly great, and some are just a fun time, and some I don't talk about very much. The series also resembles the Nightmare on Elm Street series, in particular, in that each film has to come up with a new and creative way the monster must be resurrected in the beginning and killed in the end. Here is my ranking of the films! Enjoy, Children of the Night!

NOTE: This list, for various reasons, only goes from 1958-1972, so it is technically incomplete. I apologize, but this is my ranking of the films I have seen. 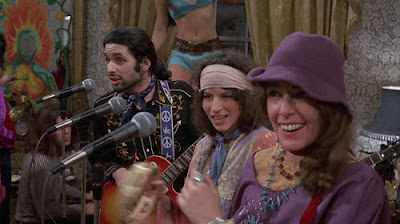 I love this series, so I won't spend too much time in the negative here. I really have no use for this film. The only redeeming thing in the film is Peter Cushing, and even his presence makes me sad that he's in such a film. Christopher Lee's scenes just scream "I'll give you guys 1 day to film my stuff". He's barely in the movie. I don't like any of the characters, the film is ugly to look at, and I can't stand watching a Hammer Dracula movie with a Disco score. Just personal taste there. If you want to see Dracula in the '70s, please watch Blacula instead. 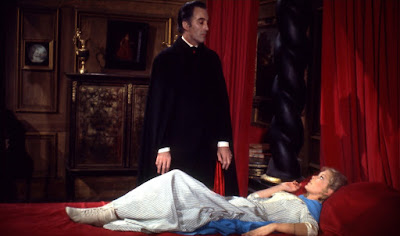 I consider this the Evil of Frankenstein of the series. If you're familiar with the Hammer Frankenstein series, you'll know Evil of Frankenstein is the one that is the most like a typical Frankenstein movie one would expect from pop culture, as it is the one where Hammer got permission from Universal to use much from their films. This fact makes it quite boring, and also cheap and weak in just about every way. That's a lot like Scars of Dracula. What is remarkable about this film is that Christopher Lee, as Dracula, has more dialogue than he has ever had in the previous films. Dracula is a charming, yet creepy, host who holds conversations with characters. He also has command over certain beasts in nature, mainly bats. In these ways he is more like the Dracula of the novel, and the Universal films. Sadly, this can barely help the fact that the protagonists in this film are terrible. Sarah is beautiful, but the actress brings nothing to the role, and Paul is a womanizing prick I cannot stand. Also, why is every male character in these movies named Paul?? 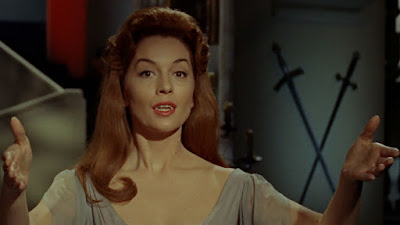 The great thing about this entry is how unbelievably beautiful it all this. The bad thing is... most everything else. Alright, I’m probably being a bit harsh, but I’m not a big fan of this one. Considering Dracula does not have a single line in the film (famously because Christopher Lee hated the dialogue and refused to say it), the whole thing rests of the shoulders of the protagonists and they are NOT up to the task. The characters in this film are exceedingly dull. I really like Barbara Shelley and Francis Matthews in other Hammer films, but they are playing far too boring characters here. I still like this one enough because of the traditional Hammer feel, and I watch it from time to time, but to me this is the film Hammer films often get accused of being. Beautiful looking period pieces that are slow, boring, and have dull stuffy characters. That is not what Hammer films are in general, but it is what Dracula: Prince of Darkness is. 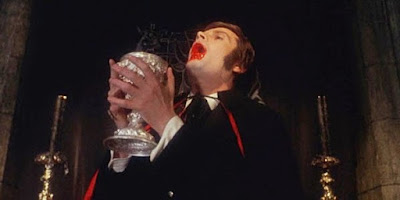 I really respect this addition in the franchise for being very different in a lot of ways. First, it incorporates a "Satanic cult"/"Satanic ritual" aspect into the Dracula lore. Second, it populates the film with extremely unlikable older men that Dracula has a vendetta against, therefore turning Dracula into a sort of folk hero. This leads to the social commentary of the film. Taste the Blood of Dracula actually has something to say about older men in power and the hypocrites they often are. When leading lady Alice (the wonderful Linda Hayden) becomes a Bride of Dracula, she actually seems less a victim and more a woman empowered against the men in her life. It may be a strange feeling to root for Dracula, but this film seems to do it. It's great that at the 5th film in the franchise, Hammer was still trying to do something interesting. Also, one of the leading men's name is Paul. 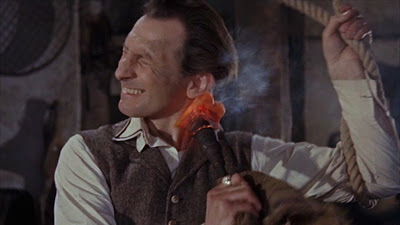 While this film does not actually feature Christopher Lee, or even the Dracula, it does count in the series and it is one of the very best. While not technically a Dracula movie, this is a great Van Helsing movie. In fact, I would so far as to say it is the best Van Helsing movie. What a great showcase for Peter Cushing! He's so badass in this movie that he gets bitten by a vampire, pours holy water on it, cauterizes the wound, and moves on. The whole climax to this film is amazing. I also love the opening, which is practically it's own amazing 20 minute mystery film. The only drawback to the movie is anytime David Peel, as the lead vampire, tries to be Christopher Lee. It doesn't work, but he is good in scenes he's not acting like a vampire. The real "spooky draw", as the title would suggest, is the vampire brides. The Gothic imagery is amazing and the film is almost perfect. 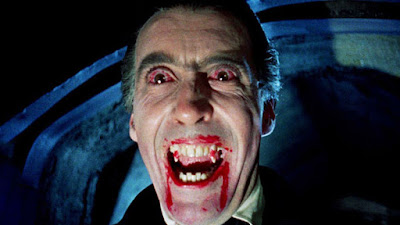 The one that started it all! Hammer's first attempt to make a Dracula movie absolutely nailed it. Christopher Lee announced himself as an amazing Dracula immediately. After one scene of a conversation with Jonathan Harker, Lee spends the rest of the movie as a silent monster, and the film is no worse off for it because of how amazing he is. He's bursting with energy with his glowing red eyes and bloody teeth. Christopher Lee is downright scary. But with a mostly silent Dracula, the film still works because of the great Peter Cushing as Van Helsing. He straight up steals the movie. This is not the Van Helsing of the Universal film. This is an active, athletic and heroic vampire hunter and Cushing is perfect for it. I love every scene of this perfect movie, and it's only #2 because of personal preference. 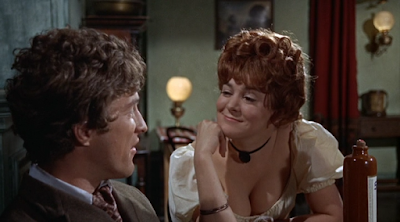 Yes, here's my weird opinion. The 4th and not-so-well-respected entry is my very favorite. I've wrote about this film, and my love for it, on the site before when I named it one of my favorite horror movies. My main reason for loving it so much is the characters. Paul (PAUL) and Maria, the "young lovers", are so much more interesting and likable than such archetypes usually are in classic horror films. I want them to be happy together forever, and want to be Paul's drinking pal (even if he's not used to schnapps). I love the idea of making the lead character in a vampire film an atheist. So many things used to fight vampires in the lore involve Christianity, and this slight change leads to some interesting difficulties Paul must face.  It also gives us an interesting confrontation with Maria's Uncle the Monsignor (some kind of Priest), and is one of my favorite scenes in the film. There's also just the fact that the film is incredibly beautiful. It's a much more colorful film than those that proceeded it with gorgeous lighting that can almost be compared to Suspiria (alright I said almost). The tone of the film perfectly marries Gothic classic horror with a fun slasher movie. And I haven't even brought up Paul's coworkers at the Pub, Zena and Max. I love everything in this movie and I watch it the most out of the whole series.

Any fellow Hammer nuts out there? What's your ranking?
Posted by Daniel Epler at 1:46 PM