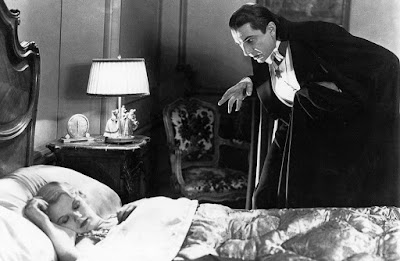 The Count is the King!

I'd never really bothered worrying about who my favorite horror character is before, but just recently I think it dawned on me. I think it's Count Dracula. Outside of maybe Batman, Dracula has been the most consistent pop culture love in my life. I can't remember a time I wasn't in love with Dracula and dressing up as him for Halloween over and over. I grew up absolutely obsessed with both Dracula (1931) and Horror of Dracula (1958). Both Bela Lugosi and Christopher Lee captured my imagination as this definitive King of all things Gothic.

What separates Dracula from the other classic monsters, is you get a sense that he is living exactly the life he wants and he is in complete control. While the Wolfman and Frankenstein's Monster are tragic victims of circumstance (and I do love that), Dracula has used his identity as a monster to his advantage. He is an ancient evil who is an incredible threat, but is so charming, handsome and cool that it's impossible to hate him. Plus, I'm just obsessed with the whole lore of vampires. I think it's all awesome. 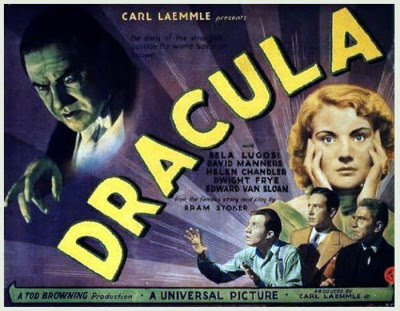 Last night I couldn't sleep, so I got up and rewatched the 1931 classic starring Bela Lugosi. While this film was my first love with the character, it occurred to me that it's probably my third favorite version of the story. While there is so much to praise with this film, I do think it has some problems.

Where director Todd Browning really shines is with production design and working with actors. The Gothic imagery on display in this film is some of the best ever created. Every scene beneath Castle Dracula showing the Vampires coffins just about has my jaw on the floor. The level the production designers go to create creepy atmosphere has been rarely duplicated. I think of all the films in the Universal Monster cycle, Dracula is the only one that I can consider at all scary. The reason for that is all due to this Gothic imagery.... and Dracula's brides. These women still scare me and I am amazed at how creepy they are. 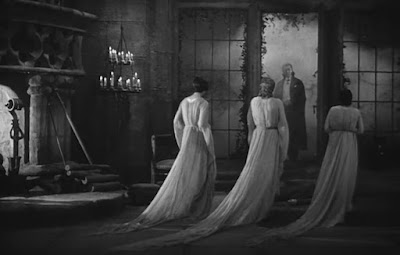 As we all know, the real stroke of genius of this film is that it might make the best casting decision in all of horror movie history; Bela Lugosi as the title character. It's easy to forget that the typical cliche of what Dracula is in pop culture did not exist before 1931. Lugosi created that and is astounding in the role. He nails the idea that Dracula is a strange and foreign gentleman completely unlike any other human being. Lugosi is so "foreign" it's like he came from another planet. Each of the major actors to play Dracula has their own stamp on the character. Christopher Lee is an animalistic monster. Gary Oldman is exploding with fire and passion. Bela Lugosi is a complete weirdo who never delivers a single line in a normal or predictable way, but completely draws you in. It's important for the Dracula character to have a certain sexual energy, and while this film came out at a time when sexuality on screen was a taboo, Bela Lugosi is able to burn the screen with his charisma. He's ridiculously handsome, but in an unusual way, and exudes so much charm you can't imagine any human being coming in contact with him able to tear their eyes away. He's so good he's able to sell the line, "To die, to be really dead, that would be glorious", and sound completely sincere. Bela Lugosi isn't playing around, he means it. 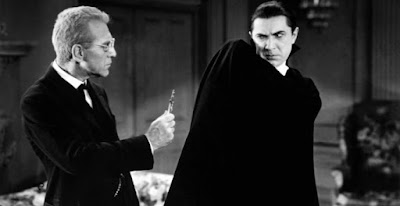 On the complete other side of the spectrum, we have the protagonists, Professor Van Helsing and Jon Harker. Honestly, they are my biggest problems with the film as they are completely boring and not very likable. It's hard to care at all about them stopping Dracula. Sure, Jon's fiance Mina is in danger of being turned into an undead vampire by Dracula, but Dracula is so awesome she might just be happier with him. It's also worth noting Helen Chandler's performance as Mina is very bizarre and almost as "other-worldly" as Lugosi's, which only confirms for me that she'd be better off with a guy like Dracula than the wet piece of white bread that is Jon Harker. Hey, Dracula's cool.

The film also suffers on a filmmaking level, as Todd Browning makes little effort to stage anything that isn't just people standing around talking. You could say that was just a product of the era, but James Whale's Frankenstein came out the very same year and seems vastly ahead of Dracula. Whale is able to stage set pieces, fights, crowd scenes, and more. In that film we actually see the Monster violently kill people on screen (including a little girl because James Whale was a transgressive weirdo and we love him for it). Browning seems content in Dracula to merely set up things that might happen, and then cut to characters talking about what happened. The one time I think this was really effective is the scene where Dracula's human slave Renfield describes the millions of rats that Dracula brings, promising to give to him. It's an amazing speech and one that is perfectly effective only being described. Dwight Frye as Renfield is another one of the film's stroke of genius. He is also on another planet. 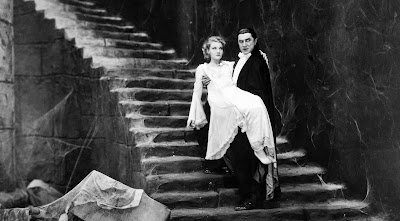 I really like Dracula and think there is so much good stuff in it. While I do prefer Horror of Dracula (1958) and Bram Stoker's Dracula (1992), and think they are superior versions of the story, I will always have a special place in my heart for the film that gave us the most iconic and important version of my favorite horror character. And his brides. Good grief, those ladies will give me nightmares.
Posted by Daniel Epler at 8:49 AM