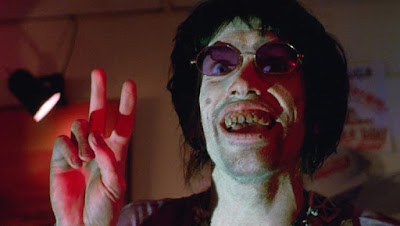 If it sounds confusing... you're still human.

I could easily write a piece naming my top 5 horror films but the truth is that sounds too constricting and too boring. What happens if I (likely) regret this list tomorrow? What if I see something new and realize it should replace something? Is everything on the internet set in stone? This is all a bit much to take. Instead, here is a list of 5 horror films I absolutely love that are absolutely not in my actual Top 5. Enjoy! 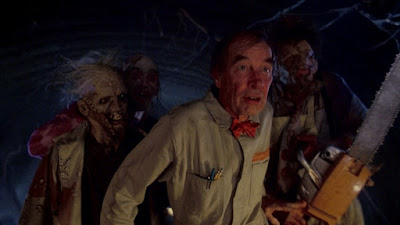 I'm a big fan of Tobe Hooper and the wild, crazy movies he makes, and this thing is the nuttiest of the bunch. Famously, Hooper intended his original Texas Chainsaw to be a black comedy, but found the joke was lost on.... well everyone. That film is a bleak death march and I am in awe of it's power. With Part 2, Hooper made the humor far more over the top and explicit. It's interesting to me that this is the only film in the franchise to be released in the '80s, as it certainly feels like the definitive '80s version of this story. Everything we love about '80s horror is cranked up to 11... 12.... and beyond. It's also lays on some social commentary about the '80s era of big business and yuppie culture. I love the wild, crazy performances and the gore that crosses almost any line possible. I love that the film is wall-to-wall fun practical effects that almost feel out of an October haunted house attraction. Hooper makes the horror and violence so insane that we can't help but laugh uncomfortably. I understand if it's a bit much for anyone, but it works for me. I love watching it with friends because it's always a crazy experience. 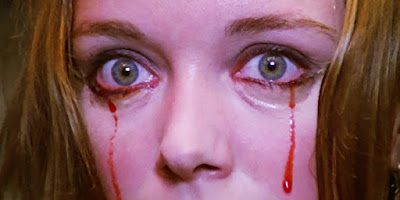 While Fulci often get reduced to just being for the "gore hounds", I actually find him to be a pretty amazing filmmaker. What Fulci does best is construct bizarre and unusual set pieces designed to frighten the audience, and builds and drags them out to their full potential. If Fulci wants to scare you with guts coming out of woman's mouth, you can bet it won't just be a throw away gag. It'll go on and on until you almost beg it to stop. He's also a master of atmosphere, and I think this film is the best example of that. The final act is a perfect example of portraying a horror nightmare on film. Plus, Christopher George! I love that guy like he's Tom Atkins. And for the record, I vastly prefer the title The Gates of Hell. 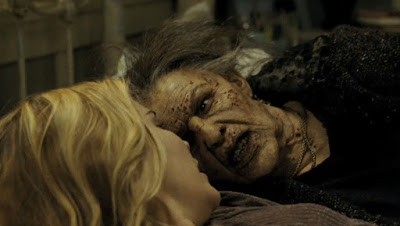 I'll go ahead and go on record and say I think this is my favorite horror film of the 2000's. After making my two favorite superhero films (and also Spider-man 3 which I do not hate) one of the greatest horror directors who ever lived returns to the genre to prove that's he's as good (if not better) than ever. Drag Me To Hell strikes the perfect tone of funny and fun, like Evil Dead 2, but never sacrificing any of the horror or scares for a laugh. It's as if the comedy and terror work hand in hand for one wild and crazy experience. Raimi, along with the previously mentioned Tobe Hooper, is one of the masters of this. I really love Allison Lohman as the protagonist and I love that Raimi makes no sacrifices for commercialization in the ending. Dammit, the man just does what he wants and I love it. 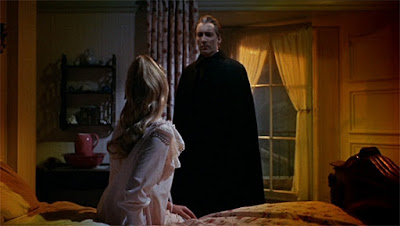 I am pretty obsessed with old Hammer Horror films. Few things make me happier than watching these stuffy British, yet also deliciously trashy, monster flicks on a rainy afternoon. Despite the fact that this fourth entry in their Dracula series does not feature the magnificent Peter Cushing as Van Helsing or the great Terrance Fisher in the directors chair, it is my favorite. This film somehow marries the Gothic atmosphere of the series with the tone of a fun slasher movie and it completely works for me. I love the young characters like the cocky yet likable college student Paul, his beautiful love Maria, and the fun-loving, yet doomed to unrequited love, pub waitress Zena. These characters are who keep me coming back to this film again and again, and watching them go up against Christopher Lee as the seductive beast of a vampire, Count Dracula, gives me all the happiness. 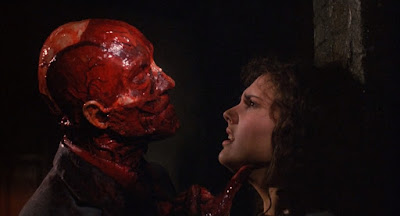 Clive Barker's first feature film is a demented, beautiful, hideous, sexual, Gothic masterpiece. What makes it interesting in the conversation about a few of my favorite horror flicks, is that it's not the protagonists that keep me coming back to it again and again. Kirsty and her Dad are fine, and I don't mind them, but neither of them enter my head when I think about what I love about Hellraiser. Instead, it's the colorful cast of evil characters that makes this film so fascinating. I love the Priest (or Pinhead as he is more commonly known) and the Cenobites, but I love that they are not really the villains. They are nothing short of terrifying, but they serve more as forces of nature than antagonists. No, it is Julia and the resurrected Frank that are truly evil. I love Julia's arch as she turns into the "evil Queen" of the film, and the practical effects that show Frank at his various stages of resurrection are nothing short of extraordinary. Hellraiser deserves to be named along side films like The Thing (1982) and The Fly (1986) for some of the greatest horror effects of all time. I love it and I'll always return to it when I feel like being uncomfortable the way Hellraiser is so good at provoking.