Your enjoyment of Witchboard is entirely dependent on how much you dig '80s horror. Witchboard is a movie about three people. A couple, Jim and Linda, and Jim's old friend but current rival, Brandon. Brandon is an intense atheist, but fully believes in ghosts and spirits and contacts them regularly. What else does an atheist have to do in the '80s? He lends Linda his Ouija board, but she abuses it by using it alone. You don't use a Ouija board alone. Hence, we have a ghost movie.

I love '80s horror. I love it so darn much I can't get enough of it. Witchboard is for people like me. There are mullets, big hair, practical gore effects, and at least one unbelievably dated '80s song. Witchboard has a lot of problems, but I really enjoyed it. And for more reasons than just the decade. That's not all it takes for me. It's not like I'm a big Nightmare on Elm Street 2 fan. Although that movie is kind of fascinating. 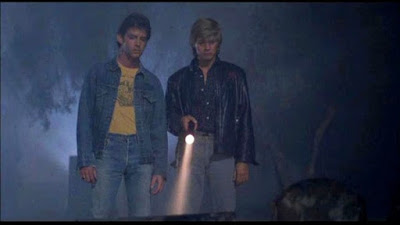 The film really succeeds at creating three strong and sympathetic central characters and got me really invested in them. The acting is even pretty solid (put that quote on the poster). The two guys have a great character arch, and their relationship is really the heart of the film. The characters are by far the best thing about the film. They are also the worst. Because unfortunately there are other characters in the film and they seem written by an alien with no idea how human beings act. First of all, Brandon hires a medium and she is unimaginably annoying. Is there anyone actually like her on this planet? No offense if you act like her. But....you don't. Nobody does. Then there's this detective trying to solve a murder, and he can take his magic metaphors and stick them where the sun don't shine. My soul was groaning every time he got to his unbelievably obvious punch line.

My Dad, who unlike me was a 20-something in the '80s, tells me the film was really terrifying to him back then. I'll just take his word for it. What really strikes me as strange is the amount of daylight in the film. I feel like almost any other director would have put so many of the scare scenes at night. What a strange choice that there is so little darkness here. And the only reason it would be ok to have this many dream sequences is if Freddy is the villain. For the most part, 'ghosts and hauntings' is probably one of my least favorite sub-genres in horror, even if there are several I like. But I would just rather see a monster or a slasher. Don't give this "it's what you don't see" Paranormal Activity jazz. But for a ghost movie, I dug this one. It's annoying at times, but mostly a solid story with an engaging mystery. But more than anything, it's a film about mending broken friendships. And for that, I can recommended it.
Posted by Daniel Epler at 11:41 AM