Tom Atkins is the man. THE MAN. For real.

Some of my reviews I'll title HORROR I LOVE. I'm not going to throw that out lightly. There are many horror movies that I'm a fan of. But then there's some that I love so much I feel like my heart explodes. Halloween III is a 'heart exploding' movie for me.

Halloween III is the one without Michael Myers. Alright now we got that out of the way! Unfortunately, this movies gets very unfairly hated on for that fact alone. That is ridiculous. Everyone alive loves movies that don't have Michael Myers in a Bill Shatner mask. Why should that stop you here just because it's in the Halloween series? If someone hates it for other reasons, that's ok. But here's why I love it. 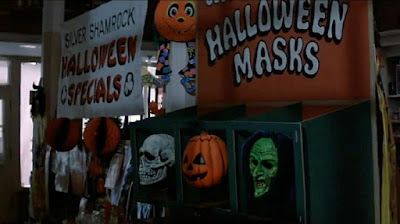 This movie has several things that I just love in movies. It has a lead character that I find awesome, fun practical effects and a willingness to go completely bonkers. And that's what this movie is. It's completely bonkers, crazy insanity that comes together to make little sense. But it is SO different! I just love a movie that's willing to be different and weird to a crazy degree and that's what Halloween III is. It also brings back the Halloween spirit that was missing in Halloween II. If this is a series that is about Halloween, like the title suggests, then Season of the Witch is very true to the series.

Let's talk about Tom Atkins. He gives one of my very favorite horror performances of all time. Atkins is another example of this film being different. It's not normal for a horror film's lead character to be a middle aged man. Where most horror films have a teenage girl, Halloween III has Tom Atkins. He's cool to an amazing level. He hits on every woman in sight, and they all love him. He wears the stache like he invented it. The film is so on his side that his ex-wife is depicted so awful and annoying that se doesn't even seem like a real person. Is that a bad thing? Of course not! This just shows you how much you should root for Tom Atkins. He's a boss in everyway! And don't ask him wear he wants to sleep. That's a stupid question.

John Carpenter provides the score and it's completely terrific. True to the feel of the film, it's a horror score with elements of sci-fi. It doesn't make any attempts to be like the first score, but it's full on Carpenter in all the best ways. 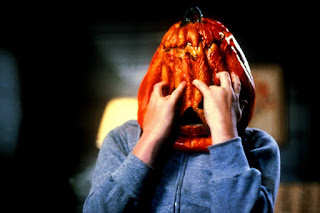 The film's reveal of the 'evil plot' at the end is madness. There's little reason for this factory owner to want all children to die by snakes and bugs rotting their heads in the world's lamest Halloween masks. But c'mon, how cool is that scene? I think it's great because of how far it goes into the weird. I'm so charmed by everything in the movie. It all works for me completely. If you've never seen Season of the Witch, or you have bad memories of it, I really encourage you to give it another chance. Open up your mind! Appreciate it for it's weirdness! You love so many films without Bill Shatner masks. There's room in your heart for this one too! And Tom Atkins. Open your heart to Tom Atkins
Posted by Daniel Epler at 4:32 PM