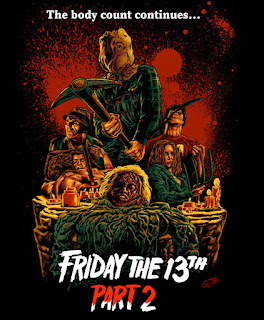 Hey, look! It all came together!

This horror franchise's first sequel was a total blast to watch. It got everything right that the first one got wrong. It does get some other thing's wrong though, but that's beside the point. This is an '80s slasher movie done right. I had so much fun with this film.

I am certainly no expert when it comes to slasher movies. My favorite kind of horror has always been the retro 'gothic' films of the '30s-'50s.  Universal monsters and all that jazz. Some of my favorite horror films do come from the slasher vein, but this journey through the 'Friday' movies for the first time is my first real dive into the genre. I must say, it's really working for me. The group of kids (or in this case, college students) get together, they hang out and have fun, a killer stalks them, and then all hell breaks loose. It's a blast. And this film is a great example.

Part 2 brings us our first real introduction to the villain of the series, Jason Voorhees. He's handled very well here. Jason is simply a crazed mountain man. He was thought to have drowned in Camp Crystal Lake, but somehow he got out (because reasons). He then lives the rest of his life in a beat up shack in the woods as a total loner and lives off the land. One would wonder why he didn't go for help, but one would have to remember that he's hideously deformed. Maybe everyone was scared of him. Maybe no one would help him. And if you want a longer monologue on the motivations and feelings of a slasher villain, there's a blonde in the film who gives you that. It's not great... but you know... it's there... and it goes on too long. 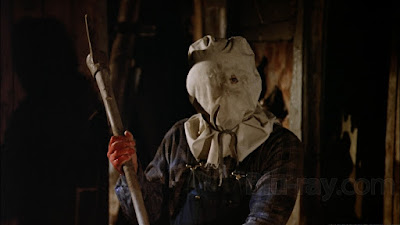 The characters in this film are, for the most part, fine. I do prefer the characters of the first one, and not just because I'm such a Kevin Bacon fan. Tremors anyone? Anyway. They certainly felt more interesting. The characters aren't unlikable. They're just fine. They suffice. One would hope for more, There is a couple I love here found in Mark and Vickie. Mark is stuck in a wheelchair and Vickie clearly crushes on him. They are hopelessly adorable and I loved watching them on screen, They are both completely charming and are bursting with chemistry together. I wish there was more of them, but they aren't the final couple. Instead a blonde, generic couple is. That's a shame. I think the film really makes a mistake in choosing the final couple (normally a final girl, but here we get a couple). Mark and Vickie are the best.  #teammarkandvickie 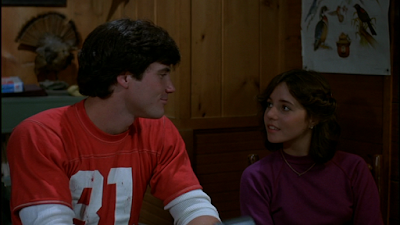 Where this film really shines is the horror. The very long final act of Jason stalking and killing is fantastic and actually has very genuine scares. There are jump scares that work. There are shocking visuals. Jason's homemade shrine to his Momma is horrifying. I really have to give director Steve Miner credit here. He did a wonderful job building suspense and creating scares, It was wonderful.

My personal biggest complaint with the film, is the garbage prologue. It's horrendous. We have to endure far too much time watching a 'previously on Friday the 13th' set of flashbacks to the first film, and then watch our original final girl wander around a house for awhile before being murdered by Jason. Seriously? This girl had to go through hell in the first film, only to be killed off in the first ten minutes of the second for literally no reason? It's absolute garbage and I hate it. I hate it so much. There is even a jump scare with a freaking cat. Good heavens I hate it. But then the film gets going, and I dig it.

I really enjoyed this movie and found it a terrific example of a slasher done right. It has it's issues, but really delivers on the horror, and introduces the world to one of the most iconic characters of all time.
Posted by Daniel Epler at 7:23 AM