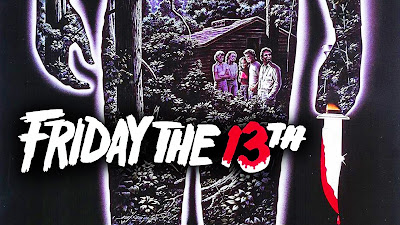 This is where I make a truly horrific confession. I have never seen the Friday the 13th franchise.

Well, I had seen one of the later sequels. But that was it. So it is hear that I embark on a dangerous journey. I just got the Friday the 13th blu-ray boxset and it's time to go through the series! I'm making this a blog series called FIRST FRIDAY. I'll try, at least once a week, to go through the series in order and offer my thoughts. How often do you get to hear a first impression on Friday the 13th in 2015? Well you can here!

The original Friday the 13th is a fascinating film. This is a film that started, not only a wildly successful film franchise, but also a string of horror movie knock offs that still continue to this day. And it did it all... without being all that great. Now hold on here! I'm not here to dog on this movie. Actually, I quite liked it! Let's talk about why.

This horror movie works best when the horror isn't going on. This is because the teen lead characters are actually quite likable. What's really bizarre about them is they are really old souls and oddly cultured. These kids do impressions of film stars of the golden age of Hollywood. One girl wears an old lady night gown to bed. Another boy is amazingly skilled on guitar. But not like he's an Eddie Van Halen fan! No, he plays classical guitar. Is all of this normal for teens of the '80s? I don't think so. One could call this a flaw in that the screenwriters have no idea what teens are like. I choose to believe this was done on purpose to make the characters interesting. I think it works! 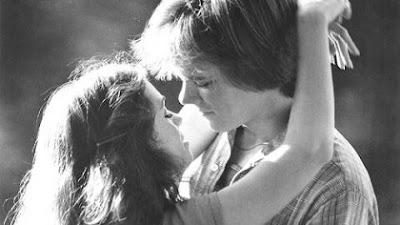 These kids are also unusual in that they are oddly nice and sweet. A staple of slasher films is the 'bad kids' always die. But the bad kids here aren't that bad at all. The couple that has sex (Jeannine Taylor and a very young Kevin Bacon) seem to really care about each other. They aren't the sleazy couple from Halloween. Their relationship feels very genuine and kind of sweet. We don't watch them as a couple of party kids who are morons. We watch them remembering our own first love from our teenager years, and we sympathize with them for this reason. Am I going too far? I really don't think so. This makes it more sad when these characters die, and ultimately more effective. Friday the 13th is a cut or two above many slashers for this reason.

The movie makes good use of practical effects for some very effective kills. Certainly Kevin Bacon's death makes no sense. How did the killer know to get under THAT bed? But there is another kill with an axe to the face that is quite horrifying and very well made. In that way, the horror works.

Unfortunately, Friday the 13th is famous for a very fascinating reason. There is no Jason. While the original Halloween and Nightmare on Elm Street movies can be remembered for introducing horror icons (and for being freaking brilliant films), this one can not. Now I can deal with a slasher movie without a great villain. But here we get Mrs. Voorhees. A villain who looks your childhood friend's mom who lives next door. She's not scary at all and is a huge let down. For this reason, all horror attempts fail as soon as she walks in front of the camera. What a shame.

The movie falling short of great is not all her fault, though. There are definite pacing issues where the film gets quite slow in the middle. The film also has many things ripped off from others. The obvious of course being the film opening with a POV murder scene right out of Halloween. Nevertheless, I enjoyed the movie as a whole, mostly due to the likable and very odd characters. It's a fun watch no doubt! And it makes me excited to continue in the series!
Posted by Daniel Epler at 7:20 AM