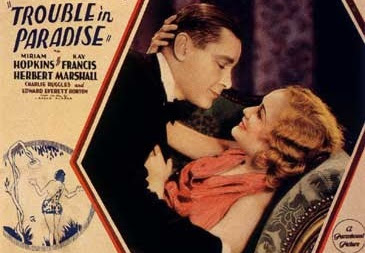 Do you find sexuality way more exciting in old black & white movies, or am I the weird one? It shouldn't be happening, and it often has to be talked around awkwardly, but it's forbidden fruit in a way. As any movie fan knows, the Hayes Code had a strangle hold on Hollywood filmmaking from the mid-1930's through the early 1960's. "Decency" and "morality" were mandated in movies and created a false image of the cleanliness of the past. I don't believe the code was a total negative (though I'm glad it's gone), as it's interesting to watch filmmakers squirm their way around it and still deliver adult entertainment. The 1940's is one of my very favorite decades for film, all the way from the feel-good Comedies to the bleak and hopeless Noirs. But there was a very special time before this when films were made that we call "pre-code".

Pre-code films are generally considered to be "talkies" that were made before Hollywood much cared about following the Hayes code. These films are not completely modern in the "R-rated" sense, but are much more caviler about traditional morality than the films that were made after. There was nudity in Tarzan and his Mate (1934), brutal and unrepentant violence in The Public Enemy (1931), torture and skinning alive in The Black Cat (1934), and dark and disturbing sexuality in Dr. Jekyll and Mr. Hyde (1931). None of these films would have been made the same way just a few years later. But the pre-code film we'll be talking about today is an Ernst Lubitsch romantic comedy called Trouble in Paradise (1932). 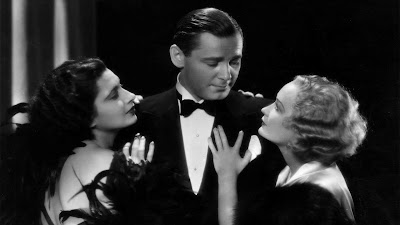 This early example of the rom-com follows a gentleman thief/con-artist named Gaston Monescu (Herbert Marshall) who meets his match in Lily Vautier (Miriam Hopkins), an expert in the same dubious field. They instantly fall in love with each other, and each other's criminal skills, and team up on a romantic adventure (without marriage, which could only be "pre-code"). While in Paris, they scheme an elaborate con to steal a fortune from Madame Mariette Colet (Kay Francis), the young and beautiful owner of a large Perfume manufacturing company. All goes well until Gaston and the wealthy Madame fall for each other, and her former lover (the always enjoyable Edward Everett Horton) threatens to reveal the criminal's true identify.

False identities, non-violent crimes, love triangles, and more love triangles. Trouble in Paradise is full of standard plot points we love in this genre. But it is important to remember how early it is and how much influence it has had. It's easy to draw a direct line from this film to Dirty Rotten Scoundrels (and 1964's Bedtime Story, which the previously mentioned film is a remake of, but I have never seen).

Trouble in Paradise is cinematic heaven, and there's really no better way to describe it. It's absolutely dripping with charm and style in every scene of the film. As we know, a Romantic Comedy has no more important asset than it's actors, and the players populating this movie surprised me in a great way. Herbert Marshall is an actor I was mostly unfamiliar with, but he was a star of melodramas and comedies throughout the 1930's and 1940's. While I may have been wishing for Cary Grant or William Powell going into this movie, I was thrilled with Marshall's performance. He perfectly embodied this extremely posh and proper criminal who could talk his way out of any situation. Watching him verbally spar with characters while even turning suspicion away from himself and onto them was crazy fun every single time. Kay Francis was also a pleasant surprise, another actor I don't think I'd seen before. Her and Herbert Marshall as the thief and the Madam have terrific scenes of fast and witty dialogue. But the fun thing about their relationship is... it's basically all sexual. 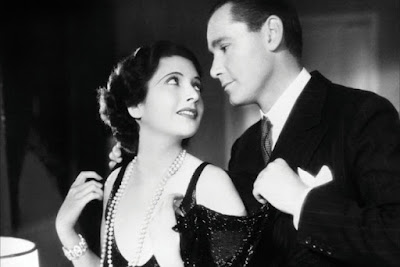 There's lip service paid to "falling in love", but it's very clear that Gaston and Madame Colet really just want to rip each other's clothes off. There are great scenes of them slowly and reluctantly going into their own bedrooms (did I mention they technically live together?), and coming very close to getting busy. Towards the end of the film when it's clear Gaston has to leave and nothing can happen, they wistfully lament that "it could have glorious" and "divine". We all know they're not talking about a glorious life growing old together. They're talking about a glorious screw. This movie is at least 70% sexual tension, and it's so fun to see how thick Lubitsch lays it on in a film this old. I'm telling you, all this innuendo is twice as fun in black & white than it is in your favorite recent sit-com.

All this, and I haven't even mentioned Miriam Hopkins as Gaston's criminal partner Lily. Honestly, I liked her better in this film than in Lubitsch's following movie Design for Living, where she spends the movie trying to date Gary Cooper and Frederick March at the same time (though it's an admirable goal, for sure). She plays the more childish and less-refined romantic interest with tons of fun and energy, and it makes me smile every time I think about her and Gaston showing off how many things they pickpocketed off each other.

Trouble in Paradise is a perfect romantic comedy. It's such a special example of what the pre-code era could offer. When the production code became fully enforced in 1935, this film was not approved for reissue and was unable to be seen until 1968. We're all so lucky it was not lost forever! Everything from the actors, the sets, and the extremely witty and suggestive dialogue make it a joy to watch at every moment.