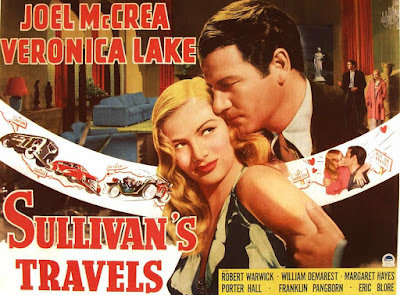 Where even a stuffy Hollywood director can learn to love these movies.

I've always found the Romantic Comedy to be the most ignored and maligned genre by cinephile communities. One could make the argument that they tend to have a lower quality control (maybe), but even the silliest action movie and the cheapest horror flick can garner a cult following among film fandom. But the Romantic Comedy is held to a stricter level of scrutiny, from analysis on gender roles to plausibility of plot developments. This is a genre I love, and I recently decided to be a more devoted student to it. I want to study these movies in the way I have for Gothic Horror over the past few years. Right at the time I made this decision I happened to watch a movie that made the argument for me on why this genre should be taken seriously. It was like the cinema gods dropped the blu-ray right into my hands! Well, and also made me pay for it.

Preston Sturges' Sullivan's Travels (1941) is not a film I would say is underrated or not taken seriously enough. It has a Criterion release, and I would say most Preston Sturges films garner respect these days. But it's a movie that not only demands respect for itself due to it's quality, but also for the whole genre it represents. And it's damn beautiful. 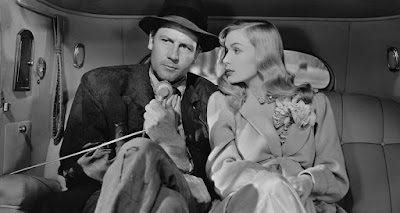 This 1941 rom-com tells the story of John Sullivan (Joel McCrea), a successful Hollywood film director, who wants to move on from directing mere Comedies and make a serious drama about poverty, suffering, and the world's ills. In an attempt to dissuade him from this less-profitable goal, his producer's point out that John has been rich his entire life and knows nothing about the world's suffering anyway. He concedes their point, but unexpectedly decides this means he must go out into the world with no more than 10 cents in his pocket and ragged clothes on his back. Along the way he runs into a depressed and failed actress (Veronica Lake, known only as "The Girl") who joins him on his wacky quest to see how the other half lives.

Sullivan's Travels is a thoroughly delightful film in everyway. Despite the fact that Sturges has legitimate things to say about poverty, everything important or intellectual takes a backseat to all the simple pleasures. The most important asset a Romantic Comedy has is it's actors, and this film is not left wanting. Joel McCrea will probably always be best known for all the cowboys he's played in the western genre, but he makes for a great comedy lead here. McCrea plays the kind of guy who's charming in spite of himself, as a lot of comedy comes from him taking himself far too seriously. He has chemistry with Veronica Lake's character against his will, as he's much more interested in his "serious" and "important" quest than falling in love with a beautiful girl. But beautiful she is, and Veronica Lake injects her with spunk and a hard-headed attitude that goes perfectly with her moments of venerability. Lake will never be remembered as one of the best actresses of Old Hollywood, but I'm always happy to see her pop up in a movie. She's always a fun presence.

The movie doesn't even stop the thrills at the comedy or romance. There's even a blast of a car chase in the first act when John tries to lose a whole bus full of reporters hoping to cash in on his unusual journey. The whole movie feels shockingly ambitious for the genre. I may still prefer Preston Sturges' previous film The Lady Eve for it's perfect execution of romance and comedy, but Sullivan's Travels is definitely a bigger swing.

Sullivan is warned by his butler early in the film that his quest is a futile one, because the poor don't want to watch more poverty in the movies. They'd rather escape it. His serious epic will only be enjoyed by the rich who will look down on the subject matter. Cut to the third act of the film when his mission takes him further down the rabbit hole than he ever anticipated and he ends up sentenced to six years of hard labor with no believing who he actually is. He and his fellow in-mates are granted the privilege to attend "the picture show" at a local African-American church (a refreshingly respectful and positive depiction of diversity for 1941). The prisoners do not sit through The Grapes of Wrath or Of Mice and Men or any other important work about poverty and suffering. They watch a Disney cartoon full of slapstick humor. The entire audience is filled with joy and laughter, and before long, cynical John Sullivan joins in the fun. 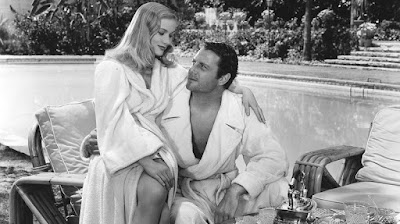 Through an absolutely ingenious plan, John is released from prison, ends up with the girl he loves, and is given a "blank check" to make his prestige picture about poverty. But he no longer wants to. His education on suffering has only made him realize the importance of comedy and making people laugh. "There's a lot to be said for making people laugh," John remarks. "Did you know that that's all some people have?." I don't believe Sturges intends to say comedy is the only valuable genre and that dramas about poverty hold no value. But he tells the story of a man who did not respect this genre and learns to through an education on the world. His self-important pretentions are removed and he sees the value of silly movies that bring joy.

Comedy is not easy, even though Preston Sturges tends to make it look so. A good romantic comedy requires a lot to go right, including the right actors with the right chemistry, an intriguing and unique set-up, and dialogue that endears one to the characters and draws one into the scene. On all these tasks Sullivan's Travels excels, and so do many more movies than a lot of people realize.