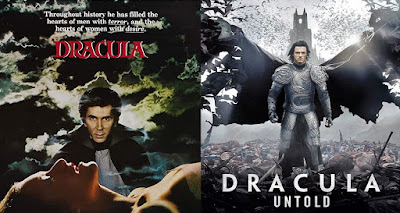 Episode 3 of our series on The Dark Universe! For 6 episodes we are taking a look at 6 different classic monster reboots from the 2000’s. Each episode will open with a discussion on an older horror film that pairs well with the reboot we’ve spotlighted, and here we are talking about two more sympathetic takes of the Dracula story. John Badham's Dracula (1979) and Dark Universe reboot Dracula Untold. For this episode, Daniel is joined by Paul Farrell, writer from Bloody Disgusting and Scriptophobics and podcaster from Scream Addicts and Dead Ringers. Daniel and Paul discuss what makes a Dracula film work, the merits of cinematic universes, and turn into a giant swarm of bats.


Email the show at cobwebspodcast@gmail.com to let us know what you think of the movies, give feedback and/or request an episode!
Paul on the Scream Addicts Podcast
Paul's writing on Bloody Disgusting
Paul's writing on Scriptophobic
Cobwebs on Twitter: @cobwebspod