Dracula (1979) - Rooting for The Prince of Darkness

There have been so many interpretations of the Dracula story that it's almost more than I can count. To me, John Badham's version released in 1979 stands out for one major reason. This is the movie where we truly root for Dracula. This is very interesting.

Dracula (1979) starts by skipping the traditional Transylvania segment that begins most versions, and opens with the boat ravaged by Dracula from his country to England. There in England, we spend the rest of the film as he purchases Carfax Abbey and mingles with his distinguished neighbors, mainly the lovely Lucy and Mina. Although Lucy is engaged to Jonathan Harker, she and the Count feel immediately drawn to each other. Is this a true Horror film, or a Gothic Romance? 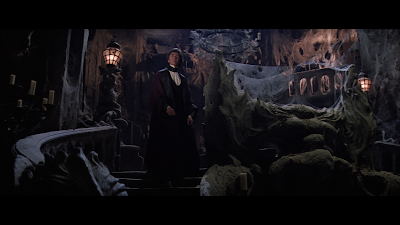 This flick confused me for a bit on the extent to which Dracula is... likable. The whole time I was almost feeling uncomfortable about the extent to which I didn't care for the protagonists. Trevor Eve's Jonathan Harker is an absolute drag. Boring, unattractive, and clearly the lamest boyfriend alive. Donald Pleasence is pleasant enough, but Laurence Olivier's Van Helsing is also quite dull. The whole movie there are two characters that completely suck the audience in and demand our full attention. Kate Nelligan as Lucy and Frank Langella as Count Dracula. 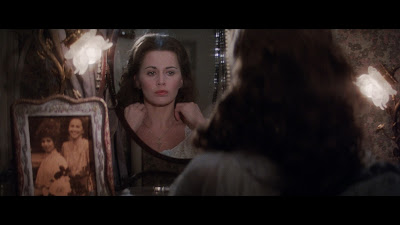 Langella has a very different take on the Count than I am used to. He is about as beautiful and charming as possible, and lacks the immediate threatening presence of Christopher Lee, or the foreign mystery of Bela Lugosi. When he first enters the film it's almost a shock just how pleasant he is. A aristocratic gentlemen of the highest order. While we see him perform some of our favorite vampire feats, like turning into a bat and crawling up walls, we never see him sprout those tasty fangs we love so much. Langella never looks like the raving monster from the Hammer films.

However, this is not the only trick up Langella's sleeve. It's apparent in later scenes with Reinfield and Harker that the threatening presence of Christopher Lee is not completely lost. This Dracula can also be intimidating and dangerous, just like we want our Prince of Darkness to be. And yet, the whole way I can't help but like him better than anyone else in the film. This is no doubt partially due to his immediate connection with Lucy and their undeniable chemistry. Their first love scene is beautifully played, and it's amazing how much the audience can give him credit for not biting her then and there. Props for restraint on the whole murder thing? Sure he's already killed Mina at this point, but we never liked her as much as Lucy anyway, and a vamp's gotta eat. I'm not one to criticize the natural food chain.

His likability is also due to the fact that he is alone in his affliction. Unlike every other version of this character I can think of, this Count never spends a moment with a single Vampire Bride. Again, it's amazing how much credit we can give him for not having a harem of enslaved ladies of the damned. Mina does become a vampire (in a truly incredible and frightening horror sequence that Francis Coppola owes the world to), but it seems like Dracula has nothing to do with her. She's all on her own in her baby-eating undead life. This almost seems worse than Dracula taking her in, but at least he's not cheating on the lovely Lucy, amiright?

My subtle hints at sarcasm are due to the fact that, yes, it's obvious how ridiculous it is to root for this guy. But I also just want to point out what a magic trick it is that these methods John Badham uses to get us on the Count's side actually work. Badham is an incredible filmmaker who made one of the best character dramas ever made, Saturday Night Fever. Seriously, if you think that's just "the disco movie" you need to take another look right now (ok, after this article). Dude knows how to craft a film, and how to play with an audience's sympathies. Jonathan Harker smacking Lucy in the face as he's trying to save her from an undead existence with a vampire might be logically excusable, but absolutely pulls us further to wanting her to end up with Dracula.

Watching the movie for the first time, I actually suspected that all of this was a mistake. I thought the movie did a poor job of giving us likable protagonists, and failed to make us want the villain to lose. That was all before I saw the film's incredible ending. In the end, Jonathan Harker defeats the vampire Count, as we all knew would happen. But then an incredible thing happens. Jonathan and Lucy looks at one another, and where there was once love there is now distrust. Through just the expressions of two great actors, we know these characters will never love each other again. It's no mistake that Jonathan gets increasingly more unlikable as it goes, and it was no evil spell that pulled Lucy to Dracula. Everything was deliberate and planned by a great filmmaker. Then just before the credits roll, we're given a hint that the Count may have survived after all and Lucy gives an expression of.... relief. An expression of happiness. Their love was real. Dracula really was something of a tragic antihero. In the age of Twlight, this may seem no big deal, but this was 1979 just after the Hammer run of Dracula films ended. Dracula ended that serious a full on Satanist. This was special. We were supposed to like Dracula.

We're currently in an age of great appreciation for Coppola's Dracula (1992), and it's well deserved. That's a great movie. But that movie would never have existed if it wasn't for Badham's Dracula and it how it paved the way for this kind of telling of the story. Let's not forget this important stepping stone. It's a great movie, in it's own right. Stunning cinematography, incredible practical sets, a gorgeous score by John Williams, and fantastic performances. This film is a gem.

The new Scream Factory blu ray includes the 1979 Theatrical Version with the original color timing, as well as the 1991 Director's Edition with desaturated color timing. For the first time, the original version is available on blu ray. It includes two commentaries, new interviews, and a making-of documentary "The Revamping of Dracula". A beautiful release!
Posted by Daniel Epler at 7:28 AM