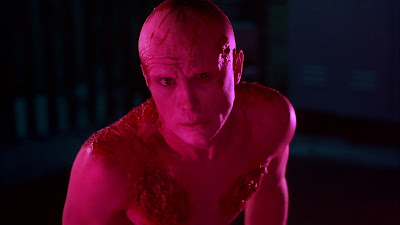 Were we in the same nightmare?

I never go into a horror film expecting to get scared. That's just far too high a bar to set as I almost NEVER feel scared by a movie. Its not fair to expect that from a film just because I have a high tolerance. But Stuart Gordon's From Beyond is a film that genuinely got under my skin. And I liked it. Let's not read into that.

I'm not going to get into plot synopsis. Sure the film's old, but I think its pretty obscere and its best to go into this totally blind. I did. I just wanted to see what else Gordon had done besides my beloved Re-Animator. Stuart Gordon did direct this film and it is very evident. Much like Re-Animator, it is incredibly original and plays like nothing else you have ever seen. This film is so unbelievably bizarre and insane that it truly amazed me. It's sick and twisted in ways that are beautiful and artistic. Now I do have to say, the effects are dated. Some of the monster effects feel very inspired by John Carpenter's The Thing, but are not as effective. Yet the effects are still very effective at being disgusting, and do we really need anything more than that? When Stuart Gordon is involved, I would argue NO. There is such a 'gross out' factor to this movie. But it doesn't feel like exploitation. It really feels like art. Dated or not, this film achieves being art and I stand by that. Whatever art is. Let's leave the philosophy behind. Stuart Gordon is the man. 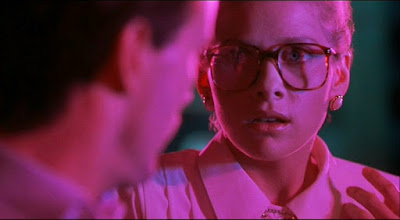 The film stars Re-Animator returners Jeffrey Combs and Barbara Crampton and Dawn of the Dead's own Ken Foree. I love them all. Honestly, the cast is so wonderful. The acting might be considered over-the-top by some, but the movie is so crazy that it all feels cohesively of a piece. I think the acting is fantastic. I cannot possibly stress enough how wonder these three people are. Don't we all just adore Ken Foree?
Pointed out by Gordon himself, the film switches its Re-Animator cast members roles. Crampton is the mad scientist and Combs is the victim. And they both play it to an unbelievable degree. It might even be to a more disturbing degree than Re-Animator because there is a bizaare "love story" going on between them. That's really a strength for this film. It engages sexuality through disturbing horror that effectively makes our skin crawl and even think about the movie in a deeper way. The use of twisted sexuality for horror is hard to miss and very well executed.

From Beyond is a gross out, bonkers and unbelievably artistic film that will get under your skin. It's a monster body horror film and a twisted "love story". Have I sold you yet? Get yourself that Scream Factory blu ray! Which I need to do. I rented this one.
Posted by Daniel Epler at 4:41 PM