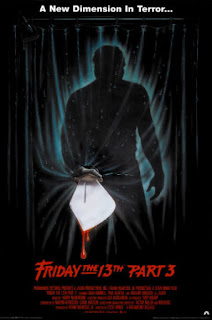 I'm not sure I have much to say here.

This third part in the series is essentially a remake of part 2. A group of teens/college students come to a cabin in the woods and murder ensues. There is very little to differentiate the film from Part 2. Except... it's not good. Oh, and it's in 3D. So that's fun?

Look, I know this movie really has it's fans. I know it's the favorite for some people. But this is the first of the series where it really didn't seem like the filmmakers where even trying. The characters are quite annoying. Shelly is kind of fun, it's nice seeing him stick it to the gang members. But all his self-loathing gets old real fast. And if he's supposed to be fat, why didn't they cast a fat actor? He's just a little chubby.

Did I mention the film is 3D? So naturally the director throws as much junk at the screen as possible! There's even a yoyo to the screen scene that goes on forever! It's insufferable and annoying. 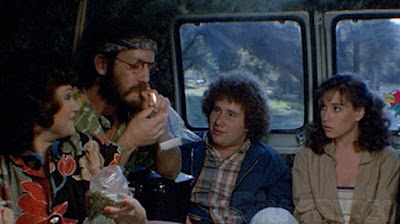 Why is sleazy girl pregnant? Why? What is the point of that? It's mentioned once and never again. I think the scariest part of the movie is imagining her and her boyfriend as parents. Please no! Oh wait, they get murdered.

The stoner couple is ridiculous. They're so old. Why are they friends with these kids? They don't even seem to know each other. What are they doing there?

Am I crazy for calling the movie kind of racist? The series hasn't had any black characters until now, and they're idiot gang members. Total stereotypes in every way. It really felt wrong. But is the point of these films to feel wrong? There's an argument for that. I still didn't like it. 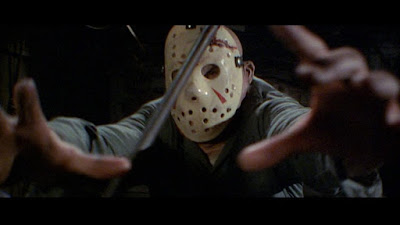 But here's the good news! Jason wears the hockey mask! So that's cool. As far as positives... that's about all I've got.

I don't care for this movie. It's just bottom of the barrel slasher. Nothing original. Nothing scary. No interesting characters.

*By the way, the blu ray looks like garbage.
Posted by Daniel Epler at 7:26 AM