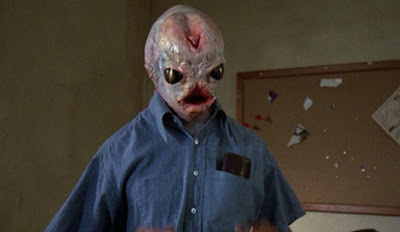 What is happening here? And why do I like it? Let's talk about it.
At long last the FIRST FRIDAY series make it's triumphant return! I haven't watched one of these in a little while, and I kind of missed it. Sitting down last night to watch another Friday film really just felt like all was right with the world. A good ol' silly slasher film is becoming like comfort food for me. So I was exactly in the right mood for A New Beginning. Apparently, this is one of the most controversial entries in the series. Much like Halloween III, this one doesn't feature the series' main villain. Now does that bother me? No. Not in the slightest. Please help me understand, how does it make any sense to be mad that Jason isn't in an entry to a series that started without Jason as the villain? I know the series has become about Jason, but it didn't start that way. So what's wrong with throwing in a different villain like the first one did? ANSWER: Nothing at all.

This film is absolute MADNESS. It's by far the craziest and the most over-the-top in the series so far. By no stretch of the imagination is this a good movie. It is trashy and it is trash. But much for those reasons, it is pretty entertaining. For most of it at least. If you enjoy being baffled by insane filmmaking and acting choices, this is the Friday for you! It's the Sleepaway Camp of the franchise. But not as good as Sleepaway Camp. Sleepaway Camp is beyond fascinating. 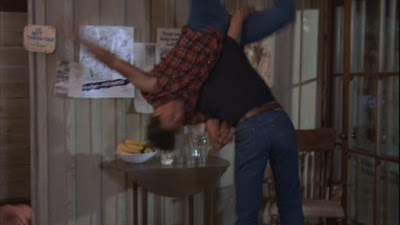 Even though Jason doesn't show up, the continuity is furthered. Tommy from the last film is here, but doesn't feel like the main character. He mostly stands around quiet, has hallucinations and beats people up. Also, apparently he's the Jean Claude Van Damme of the series. Where did those skills come from? It feels so weird to me to bring back the last film's main character and side-line him so we can focus on.... who exactly? I can't even tell you who the main character is. It's weird. But isn't everything here? Yes, so it's very much of a piece.

The movie feels completely NOT self aware and is beyond non-PC. There are two 'mentally challenged' characters who are horribly portrayed and murdered in insanely brutal fashion. What on earth is happening??? There are a crazy amount of examples to show you the filmmakers are completely out of their minds. But the entertaining craziness isn't all the film has. It also has some boring scenes of 'killer chasing final girl who we don't care about'. That's when the film really drags. We've seen a killer chase people before. But we haven't seen most of the insane character interactions. That's where the movie shines for me. 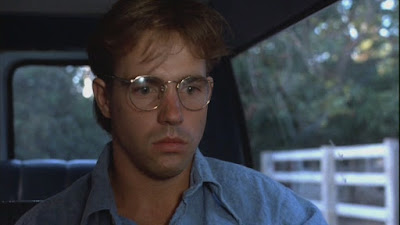 I really dig A New Beginning. It's not for everyone, but if you can enjoy the work of a mad man, this is probably for you. Don't let there being no Jason stop you from having fun. But you can let the horrible depiction of mentally challenged people stop you. In fact, I might even respect you for it.