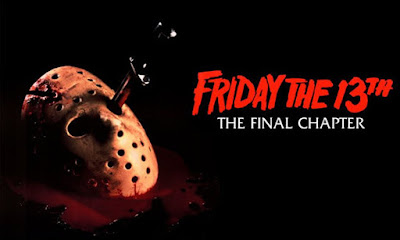 Cory Feldman in a Friday movie?? Bring it on!

After the disappointment of Part III, I was eager for a glorious comeback! The Final Chapter throws a twist in the formula by not just having a cabin of kids, but also a small family living next door. Including young Cory Feldman, who is a very welcome presence. It's nice having a kid there for a change. It makes the film feel different and fresh. And Cory Feldman is always fun to watch. He's just a cool kid. He's a clear monster fan, which makes us horror fans instantly identify with him. Who among us was not a monster fanatic as a child? 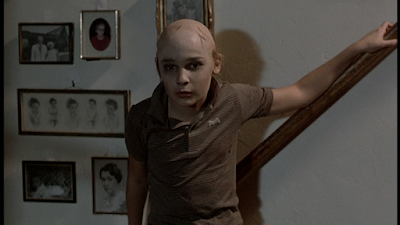 The film opens with the shortest prologue of the sequels at this point (thank goodness), and then goes to Jason being taken to a morgue. He rises from the dead (because he's Jason), and kills two hospital employees. This is a fun scene, because it makes Jason feel like a zombie. Him rising from a morgue adds a creepy factor and definitely elevate the film for me.

Once we meet our group of crazy kids we're introduced to Back to the Future's own Crispin Glover! Another presence to make the film better! He's always great to see, especially when playing a lovable loser. Of course he's very easy to root for, even when not on his way to the Enchantment Under the Sea dance.

If you can't tell already, I really dug this movie. While I would never say it has a great script, it does seem like the most effort went into writing it since the first one. At least they try to write conversations, instead of characters just walking around together in silence, or just spouting nonsense. I also appreciate the addition of the family, as they make us care more than if it was just another group of teens. Although that may have been enough considering we get Crispin. But even so, it's better this way. 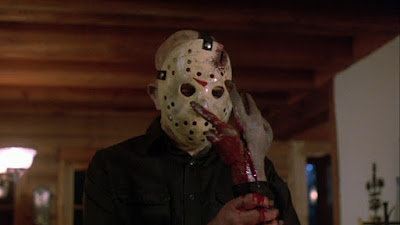 As far as kills, the film keeps them interesting. I would also argue that this one has the most brutal one, when the 'bear hunter' gets it. We actually see Jason hack him to death. We don't see much in terms of blood and gore, but the image of Jason beating him as he screams is undoubtedly horrifying.

Slasher movies often suffer when the end chase scene happens. The films tend to slow down at this point and get a little boring. This one avoids that by making it more interesting. Our final girl isn't just running from Jason, she's also protecting her little brother. Their interaction adds some interest and the director creates interesting things for them to do. The chase scene works.

I think Friday the 13th: The Final Chapter is terrific. It's a great example of a slasher film with a decent script, horrifying acts of brutality, and actors we love to see.
Posted by Daniel Epler at 7:27 AM