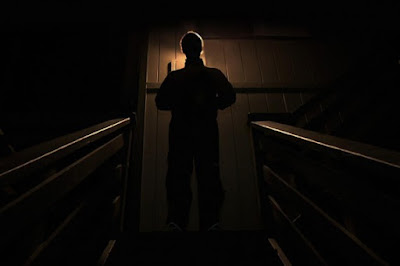 This movie is really sticking with me... in the best way.

Creep is a fairly recent horror film by Patrick Brice and Mark Duplass. It's filmed very much on the cheap and only features two on-screen actors. The film follows Aaron (Brice) who is hired by Josef (Duplass) to film one of his final days so the dying man has something of himself to leave his unborn son. From there things get very weird, very stalkery, and pretty darn entertaining.

The film really feels like two guys had some spare time and decided to shoot a movie. It is 'found footage' but absolutely gives a better reason for it than almost any other entry in the sub-genre. It's not so much a style a much as a part of the story, which is how it should always be. And fortunately, these guys are very, very talented. Between this and 'The One I Love' I'm really becoming a fan of Mark Duplass. He gives a great genre performance here. He plays a nice, cool guy so well but you can't help but find him slightly creepy. Perhaps the best part of the performance is how little it actually changes as we grow more and more suspicious of him. The subtlety is impressive indeed.

In fact, subtlety is a strength of this film. It downplays the scares by displaying them in such a 'matter-of-fact' way that it actually adds to the power. But don't worry! The film doesn't in anyway subscribe to that 'what you don't see is better' nonsense. You see things. And it's spooky. Yet still fun.

Patrick Brice (also the director of the film) gives a very natural performance as an everyday normal guy. He does it well, but he's so natural and normal that he leans over on the 'dull' side. The film does suffer when Duplass isn't on screen. We're just waiting for him to come back. One would say this is normal, but just think of Stuart Gordon's 'Re-Animator'. Jeffery Combs is the fun role by far, but Bruce Abbott still gives an interesting performance and carries his scenes well. The straight man doesn't have to be boring. But this one is.

The structure of the film doesn't always flow very well. It's perfectly entertaining about two-thirds through, and then slows down and feels slightly clunky. The end then hits hard though so one will leave with a smile. And maybe a chill. I left with both. I thought Creep was a bright spot in modern horror and is something I haven't been able to spot thinking about over the past couple days. I love a movie that sticks with you, so I might just end up loving Creep.
Posted by Daniel Epler at 3:25 PM